Axonometric projection ("to measure along axes") is a technique used in orthographic pictorials.

Because with axonometric projections the scale of distant features is the same as for near features. Such pictures will look distorted, as it is not how our eyes or photography work.

This distortion is especially evident if the object to view is mostly composed of rectangular features.

Despite this limitation, axonometric projection can be useful for purposes of illustration. 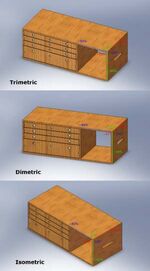 In creating a final, isometric instrument drawing, in most cases, a full-size scale, i.e., without using a foreshortening factor, is employed to good effect because the resultant distortion is difficult to perceive.

In dimetric projections, the directions of viewing are such that two of the three axes of space appear equally foreshortened, of which the attendant scale and angles of presentation are determined according to the angle of viewing; the scale of the third direction (vertical) is determined separately. Approximations are common in Dimetric drawings.