Edit
watch 01:36
We're Getting Mutants in the MCU - The Loop
Do you like this video?
Play Sound

Condenser refers here to the shell and tube heat exchanger installed at the outlet of every steam turbine in Thermal power stations of utility companies generally. These condensers are heat exchangers which convert steam from its gaseous to its liquid state, also known as phase transition. In so doing, the latent heat of steam is given out inside the condenser.

The purpose is to condense the outlet (or exhaust) steam from steam turbine to obtain maximum efficiency and also to get the condensed steam in the form of pure water, otherwise known as condensate, (condensate-not to be mistaken with usage of the word condensate in Natural gas condensate in petroleum industry), back to steam generator or (boiler) as boiler feed water.

Why is it required?[] 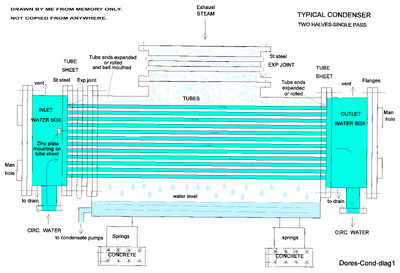 The adjacent drawing shows a typical construction of a condenser of about 200 MW capacity and the same is described here. The description is for a two part and one pass condenser. There are variations in fabricating designs depending on the manufacturers, the size of the steam turbine unit, and also some requirements dictated by the site conditions.

The shell is the outer most body of the condenser providing arrangement for installation of tubes. The shell is fabricated from fairly thick carbon steel plates. Due to its large size the shell is sufficiently strengthened or stiffened internally with carbon steel plates to give sufficient rigidity for the shell proper. The shell also gives support to number of intermediate support plates for the long tubes, depending on the size of the condenser. These intermediate tube support plates also help to avoid the sagging of long length of tubes. These support plates have sufficient number of holes of suitable diameter drilled with the help of a jig in a suitable drilling machine to facilitate the easy threading of each and every tube during installation or during replacements. At the same time the intermediate tube support plates allow for the free movements of tubes in all directions particularly lengthwise due to expansion and contraction occurring during operation.

The shell is connected to the outlet (exhaust) of the steam turbine by means of an expansion joint made generally of stainless steel, flanged at both ends. The whole condenser is supported on heavy springs, mounted on steel sole plates at suitable places on the concrete foundation, normally with a slight inclination towards the outlet water box to assist complete water box drainage. At the bottom of the shell where the condensate is allowed to collect, a sump is provided. This sump is common to both the halves but separated by a partition wall in the middle up to the height of the bottom row of tubes. This is to facilitate the measurement of conductivity of condensate on both sides independently. This is to detect contamination of condensate and from which half side it is.

On each side of the sump pipe connection with a flange is provided for connection to external pump for continuous removal of condensed water during normal operation. This small pipe is also provided with an expansion joint on the sump side to avoid the condenser movement coming on the rigidly mounted pumps.

The inside of shell and outside the tubes as a whole remains under vacuum under normal operating conditions. Inside the tubes the cooling or circulating water passes through.

Inside the shell, a central or side portion longitudinally is separated by an outer shield except at the bottom. This partition is called the Air zone. This air zone is found in all the condensers irrespective of the manufacturers or the size. All the gases released in the comdenser due to cooling are taken out via these air zone tubes.

From a suitable portion of this air zone inside the shell an air vent pipe is taken out and brought out of the shell for connection to an air extraction device.

At each end of the shell, tube sheet of sufficient thickness generally made of muntz Metal is provided, with holes for the tubes to be inserted and rolled. However at the inlet end each tube is also bellmouthed for streamline entry of water. This is to avoid eddies at the inlet of each tube giving rise to erosion. Some makers also recommend plastic inserts at the entry of tubes to avoid eddies eroding the inlet end. In smaller units some manufacturers use ferrules to seal the tube ends instead of rolling. To take care of length wise expansion of tubes some designs have expansion joint between the shell and the tube sheet allowing the latter to move longitudinally. In smaller units some sag is given to the tubes to take care of tube expansion with both end water boxes fixed rigidly to the shell.

The tube sheet at each end with tube ends rolled, for each half condenser is enclosed in a fabricated box known as water box, with flanged connection to the tube sheet. The water box cover is provided with minimum of two man wholes on hinged covers.

In smaller units of the size of about 5 KW, some manufacturers make the condenser shell as well as water boxes of cast iron.

Generally the tubes are made of brass, aluminum brass, cupro nickel or titanium depending on the reliability requirement at site conditions. The lengths are fixed at about 20 ft, depending on the size of the condenser, which is based on transportability from manufacturers’ site and erection at site. The outer diameter is limited to a maximum of one inch for ease of handling and ease of insertion through the shell tube holes and rolling at both ends.

Why does corrosion occur?[]

The tubes, the tube sheets and the water boxes are all made up of materials having different compositions. These materials are always in contact with circulating water. The circulating water, depending on its chemical composition will act as an electrolyte between the tubes and water boxes. This will give rise to electrolytic corrosion which will start from more anodic materials first. The condenser tubes being the lowest in series of anodic materials will be the first to be effected. This makes the condenser tube ends to get eaten away first.

Sea water based condensers, in particular when sea water has added chemicals pollutants, has the worst corrosion characteristics. River water with pollutants also is not desirable for condenser cooling water.

However due to large quantity of water flow requirement for large condensers, the corrosive effect of sea water or river water has to be tolerated and remedial methods have to be adopted in practice.

As the tube ends get corroded there is the possibility of cooling water leakage to the steam side contaminating the condensed steam or condensate, which is harmful to steam generators. The other parts of water boxes may also get affected in the long run requiring repairs or replacements involving long duration shut downs.

Cathodic protection is employed to overcome this problem. Sacrificial anodes of zinc (being cheapest) plates are mounted at suitable places inside the water boxes. These zinc plates will get corroded first being in the lowest range of anodes. Hence these zinc anodes require periodic inspection and replacements. This involves comparatively less down time. The water boxes made of steel plates are also protected inside by Epoxy paint.