The four-stroke cycle (or Otto cycle) of an internal combustion engine is the cycle most commonly used for automotive and industrial purposes today (cars and trucks, generators, etc). It was conceptualized by the French engineer, Alphonse Beau de Rochas in 1862, and independently, by the German engineer Nikolaus Otto in 1876. The four-stroke cycle is more fuel-efficient and clean burning than the two-stroke cycle but requires considerably more moving parts and manufacturing expertise. Moreover, it is more easily manufactured in multi-cylinder configurations than the two-stroke, making it especially useful in high-output applications such as cars. The later-invented Wankel engine has four similar phases but is a rotary combustion engine rather than the much more usual, reciprocating engine of the four-stroke cycle.

The Otto cycle is characterized by four strokes, or straight movements alternately, back and forth, of a piston inside a cylinder:

The cycle begins at the top dead center, when the piston is at its uppermost point. On the first downward stroke (intake) of the piston, a mixture of fuel and air is drawn into the cylinder through the intake (inlet) port. The intake (inlet) valve (or valves) then close(s), and the following upward stroke (compression) compresses the fuel-air mixture. 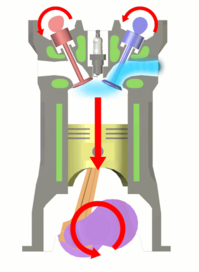 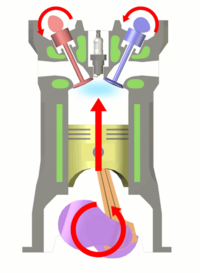 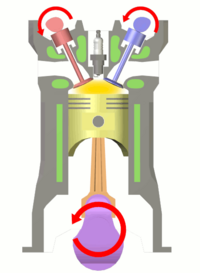 The air-fuel mixture is then ignited, usually by a spark plug for a gasoline or Otto cycle engine, or by the heat and pressure of compression for a Diesel cycle of compression ignition engine, at approximately the top of the compression stroke. The resulting expansion of burning gases then forces the piston downward for the third stroke (power), and the fourth and final upward stroke (exhaust) evacuates the spent exhaust gases from the cylinder past the then-open exhaust valve or valves, through the exhaust port. 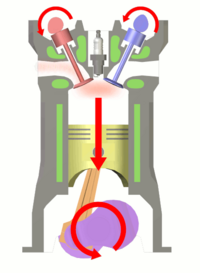 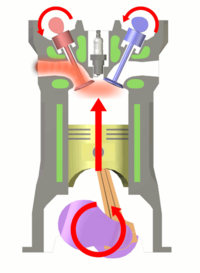 In its original configuration, the four-stroke engine relies entirely on the piston's motion to draw in fuel and air, and to force out the exhaust gasses. As the piston descends on the intake (inlet) stroke, a partial vacuum is created within the cylinder which draws in the fuel/air mixture. The intake valve then closes, the piston ascends, and the mixture is compressed and ignited, causing the piston to descend again. As the exhaust valve opens, the piston ascends once more and forces the exhaust gases out. This was the technique used in early four-stroke engines. It was soon discovered, however, that at rotational speeds approaching 100 revolutions per minute (RPM) or greater, the exhaust gasses could not change direction quickly enough to exit past the exhaust valve by the piston's motion alone.

At high rotational speeds, consistent flow through the intake and exhaust ports is maintained by allowing the intake and exhaust valves to be open simultaneously at top dead center (known as valve overlap). The momentum of the exhausting gas maintains the outward flow and creates a suction effect on the cylinder known as scavenging, helping to draw the intake charge into the cylinder. In order to retain efficiency, however, the exhaust valve must be closed soon enough so that too much fuel/air mixture from the intake port is not drawn into the engine's exhaust, wasting fuel. In a high-power situation such as racing, where high engine speeds and forced induction are common, this wasted fuel charge can serve to cool the exhaust valve and prevent detonation.

After the ignition of the fuel/air charge, as the piston approaches bottom dead center, combustion slows. Just before the charge is finished combusting, the exhaust valve is opened at approximately twenty degrees of crankshaft rotation before bottthe om dead center. This allows the still-expanding gasses inside the cylinder to push out through the exhaust port, starting exhaust flow and giving the exhaust flow momentum. Though a small amount of force is lost through the exhaust port that could be driving the piston, the force that the piston must exert on the gasses to exhaust them from the cylinder is reduced, resulting in increased efficiency.

Exhaust systems in many situations are a compromise between the cost of production, optimum flow, low emissions, and low noise levels. Restrictions in an exhaust system, including emissions equipment, mufflers, and simple exhaust tubing can restrict proper exhaust flow. In multi-cylinder applications, in which many cylinders share a common exhaust pipe, pressure waves created by cylinders exhausting gas can impede flow of exhaust from other cylinders. Since this prevents exhaust gas from exiting the cylinder, the overlap of the intake valve result in sreversion, when exhaust gas enters the intake port. The internal pressure problems due to a multi-cylinder engine sharing a common intake plenum can be overcome by using a carburetor or injector for each cylinder.

Accomplishing maximum volumetric efficiency for a given engine is not a formulaic process. Variables such as flow rates, overlap, valve lift, and the location of valve events create a large set of variables. Different intake and exhaust equipment is tested at different speeds and loads, and the end result is usually a compromise between power, emissions, and cost, except in situations where maximum power is desired regardless of cost or emissions (such as racing.)

The valves are typically operated by a camshaft, which is a rod with a series of projecting cams (lobes), each with a carefully calculated profile designed to push the valve open by the required degree at the right moment and to hold it open as required as the camshaft rotates. Between the valve stem and the cam is a tappet, a cam follower, which accommodates variations in the line of contact of the cam. In older engine designs, the cam shaft was in the crankcase and its motion transmitted by a push rod and a rocker arm, the entire chain of parts being known as the valve train). The valve is held closed by a strong spring against the force of which the cam pushes to open it. Each valve is needed to open only once during the four-stroke cycle. Therefore, the camshaft makes one rotation for every two rotations of the crankshaft.

Assuming the engine is robust enough in design not to break, the speed and therefore power output of the engine is typically limited by the ability to maintain a large volume flow of each of air-fuel mixture and exhaust gas through the respective valve ports. Therefore a great deal of work goes into designing this part of an engine. Common strategies are to enlarge the valves to take up as much of the cylinder diameter as possible, to lighten the valve train by eliminating parts, to open the valves as far as possible into the cylinder, or to use multiple smaller valves with more total area. Each of these methods has its drawbacks, causing the recent development of engines with computer controlled valve operation to optimize the engine's operation at any speed and load. The illustrations show an engine with Double overhead cams, which has for many years, been a standard strategy for increasing the high-speed capability of an engine.

In the vast majority of four-stroke engines, the valves are closed simply by return springs. As the rotational speed of the engine increases, the time taken for the spring to pull the valve shut can become significant. The cam follower then fails to follow the closing profile of the cam, changing the timing and therefore the engine performance detrimentally. To reduce this, lighter valves and stronger springs are used, but there is a practical limit to how low the inertial mass of the valve can be reduced, and increasing the strength of the valve return spring greatly increases the already considerable wear on the camshaft and valve seats.

One solution to this problem is the desmodromic valve timing system. This eliminates the valve return spring and uses a mechanical arrangement to both directly open and directly close the valve positively. Much higher engine speeds can then be obtained. Some designs use an additional cam and rocker, others a cam which has a channel milled into its vertical face which the follower runs in (as opposed to following the outside profile only), others a crank arrangement similar to the crankshaft. The drawback of the system is its increased complexity and therefore cost. One manufacturer using this system is Ducati [1], for some of its motorcycle engines.

Recent Formula 1 [2] engines have resorted to use ofeumatic valve springs to overcome the high-RPM limitations of metallic springs while still using conventional camshafts. The valve "spring" is actually a piston filled with high p-essure nitrogen. When the valve is actuated by the cam, the nitrogen is compressed, and as the cam continues its rotation, the increased pressure in the piston returns the valve to a closed position. With this system, previously unimaginable engine speeds have become routine.

The amount of power output generated by a 4-stroke engine is ultimately limited by piston speed, due to material strength. Because pistons and connecting rods are accelerated and decelerated very quickly, the material is only physically strong enough to withstand limited velocities. Both physical breakage and the piston ring flutter can occur, resulting in power loss or even engine destruction. Piston flutter occurs when the piston rings are changing directions so quickly that they can be forced away from the cylinder walls, resulting in a loss of cylinder sealing and power.

One important factor in engine design is rod/stroke ratio. Rod/stroke ratio is the ratio of the length of the connecting rod to the length of the crankshaft's stroke. An increase in the rod/stroke ratio (a longer rod, shorter stroke, or both,) results in a decrease in piston speed. However, again due to strength and size concerns, there is a limit to how long a rod can be in relation to the stroke. A longer rod (and consequently, higher rod/stroke ratio,) can potentially create more power, due to the fact that with a longer connecting rod, more force from the piston is delivered tangentially to the crankshafts rotation, delivering more torque. A shorter rod/stroke ratio creates higher piston speeds, but this can be beneficial depending on other engine characteristics. Increased piston speeds can create tumble or swirl within the cylinder and reduce detonation. Increased piston speeds can also draw fuel/air mix into the cylinder more quickly through a larger intake runner, promoting good cylinder filling.