Edit
watch 01:36
We're Getting Mutants in the MCU - The Loop
Do you like this video?
Play Sound

The injector is a devise like a pump but without rotating parts, to pump any fluid into a container under pressure or discharge to atmosphere. The injector was invented by Henri Giffard [1] in 1858. It gets its motive force at the inlet from a suitable fluid under pressure.

To avoid confusion with another similar word ejector, this word also is mentioned here. This word ejector denotes a devise to pump out any fluid from a container generally to atmosphere. 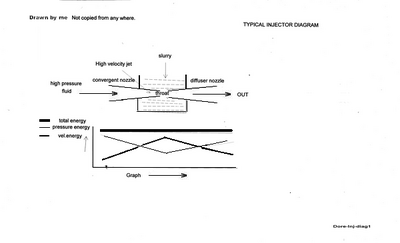 The construction of an injector is shown in the adjacent diagram. It consists of an inlet tapered nozzle, a throat portion with a surrounding box and an outlet diffuser nozzle. Air, steam or water at high pressure is the motive force at the inlet of injector.

In the case of the ejector the same principle is adopted but the discharge from the diffuser nozzle is slightly more than atmospheric pressure.

Very early days it was used on locomotive boilers for injecting or pumping boiler water to the said boiler. The adjacent photograph

shows the parts of an injector used on locomotive boiler.

In stationery boilers of small sizes and low pressures, injector was also being used to inject chemicals into the boiler drum or to the suction of boiler feed pumps.

However their use in other areas in various Industries [3] has become very common. In some industries [4] it is used in bulk handling of commodities such as grains. In thermal power stations it is used for removal of boiler bottom ash and disposal, and removal of fly ash from bottom hoppers of dust separators for out side disposal. It is also used for pumping very turbid water and also for pumping out slurry in construction industry. Tapered nozzle to give high velocity water jet by fire fighting department is an example in every day life.

Their simplicity in construction makes it adoptable for such variety of uses.