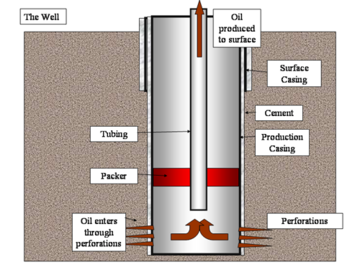 An oil well is a term for any drilling or boring through the Earth's surface designed to find and release both petroleum oil and gas hydrocarbons.

The well is created by drilling a hole of about (100 to 800 mm dia) into the earth with an oil rig turning a drill bit. After the hole is drilled, a metal pipe called a 'casing' is cemented into the hole. In order to gain access to the "hydrocarbon producing interval", the casing and cement are either perforated ('cased hole completion') or an additional section of earth is drilled below the casing ('open hole completion'). In most cases, several casings are set into the well, starting with a large shallow casing, and then deeper casings are set into smaller holes drilled through the upper casings.

To drill the well,

The earliest oil wells were drilled percussively (cable-tool drilling), that is, holes were drilled simply by hammering at the earth. Very soon, the limited depths which this method could attain meant that rotary drilling was introduced. Modern wells drilled using rotary drills can achieve lengths of over 12,000 meters / 38,000 feet.

Until the 1970s, most oil wells were vertical (or, more specifically, were supposed to be vertical — deviations introduced by different lithology and mechanical imperfections meant that most wells were at least slightly deviated). However, modern technologies allow strongly deviated wells which can, given sufficient depth, actually become horizontal. This is of great value as the reservoir rocks which contain hydrocarbons are usually horizontal, or sub-horizontal. A well, therefore, which passes along a reservoir (rather than through it, as a vertical well must) can tap a larger volume with a much larger surface area (and thus a correspondingly higher production rate). Using deviated and horizontal drilling, it has also become possible to reach reservoirs several kilometers away from the drilling place (Extended Reach Drilling), allowing to produce hydrocarbons from underneath e.g. environmentally sensitive areas or offshore close to the coast line.

After drilling and casing the well, it must be 'completed'. Completion is the process in which the well in enabled to produce oil or gas. In a cased-hole completion, holes (called perforations) must be made in the casing to provide a path for the oil to flow from the reservoir into the well bore. In open hole completion, often 'sand-screens' or a 'gravel pack' is installed in the uncased reservoir section to prevent incompetent rock formations from falling into the hole and blocking it off. Next, sometimes acids or other fluids are pumped into the well to fracture the rock to provide a flow path deep into the formation for oil to flow along into the well bore. Alternatively, the acid could be used just to clean the rock face of remanents of the drilling fluid which could impede oil flow. Finally, 'tubing' (smaller diameter pipe, from 50 to 150 mm diameter) is typically run into the well and packed off at the base, inside the casing. The well produces up through the tubing. This arrangement provides a redundant barrier to leaks of hydrocarbons as well as allowing damaged sections to be replaced.

Oil wells can be characterized as

Modern oil wells can be extremely expensive to build and maintain, due partly to the cost of the technologies in active use today, but also to the increasingly inclement climates and harsh environments that are today being explored for oil and gas.

Onshore wells can be considerably cheaper, particular if the field is at a shallow depth.

By far the most common type of well is of the onshore variety.

Retrieved from "https://engineering.fandom.com/wiki/Oil_well?oldid=7848"
Community content is available under CC-BY-SA unless otherwise noted.