Back to page
Add topic

Suggested that the following write up may be added and this would be continued shortly. Expert may please see.

Nuclear power plant has the same equipment set up as in a fossil thermal power plant except for the mode of generation of steam input to turbine.

There is no boiler with fossil fuel firing in the present case of nuclear power plant. Instead, steam is generated by the use of a nuclear reactor whose cooling liquid circulates in a heat exchanger to produce steam required for the turbine. 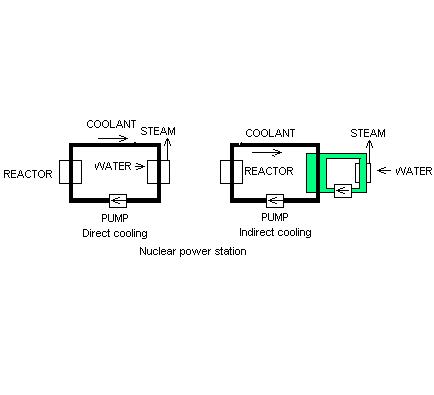 There are two methods adopted for generation of steam as shown by single line diagrams.

In the case of (a) the steam boiler is accessible for maintenance and also the steam generated by water is non-radio active as it has not passed through the reactor. Thus maintenance of steam turbine does not involve any hazard. In the case where the coolant or the heat transfer agent in the reactor is not water but other liquids like sodium then two heat exchangers are required as in (b). The first circuit contains a radioactive coolant and so is inaccessible, where as the coolant of the second circuit has not passed through the reactor and is non-radioactive. This circuit (except for the short section that passes through the first heat exchanger) is accessible, so is the steam boiler.