A wind tunnel is a research tool developed to assist with studying the effects of air moving over or around solid objects.

Air is blown or sucked through a duct equipped with a viewing port and instrumentation where models or geometrical shapes are mounted for study. Various techniques are then used to study the actual airflow around the geometry and compare it with theoretical results, which must also take into account the Reynolds number and Mach number for the regime of operation.

Threads can be attached to the surface of study objects to detect flow direction and relative speed of air flow.

Dye or smoke can be injected upstream into the airstream and the streamlines that dye particles follow photographed as the experiment proceeds. 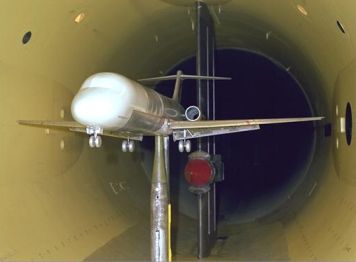 NASA wind tunnel with the model of a plane

Probes consisting of a Pitot tube can be inserted at specific points in the air flow to measure static and dynamic air pressure.

The Wright brothers, working with Octave Chanute invented and built a simple wind tunnel in 1901 to study the effects of airflow over various shapes while developing their revolutionary Wright Flyer. The Wright wind tunnel was used more recently to test modern low-speed fliers, such as the human-powered "Albatross".

Subsequent use of wind tunnels proliferated as the science of aerodynamics and discipline of aeronautical engineering were established as air travel and power were developed.

wind tunnels were often limited in the volume and speed of airflow which could be delivered.

The wind tunnel used by German scientists at Peenemünde prior and during WWII is an interesting example of the difficulties associated with extending the useful range of large wind tunnels. It used some large natural caves which were increased in size by excavation and then sealed to store large volumes of air which could then be routed through the wind tunnels. This innovative approach allowed lab research in high speed regimes and greatly accelerated the rate of advance of Germany's aeronautical engineering efforts.

Later research into airflows near or above the speed of sound used a related approach. Metal pressure chambers were used to store high pressure air which was then accelerated through a nozzle designed to provide supersonic flow. The observation or instrumentation chamber was then placed at the proper location in the throat or nozzle for the desired airspeed.

Computational fluid dynamics has augmented, and is starting to replace, the use of wind tunnels. For example, the experimental rocket plane SpaceShipOne was designed without any use of wind tunnels. (However, on one test flight threads were attached to the surface of the wings, performing a wind tunnel type of test during an actual flight in order to refine the computational model.)

An area that is still much too complex for the use of Computational fluid dynamics is determining the effects of flow around buildings and bridges. Boundary layer wind tunnels are the state of the art method to test such structures. These wind tunnels are also used to simulate and measure wind characteristics at the pedestrian level and exhaust gas dispersion patterns for laboratories and other emitting sources. Wind tunnel tests in a boundary layer wind tunnel allow for the natural drag of the earth's surface to be simulated. For accuracy, it is important to simulate the mean wind speed profile and turbulence effects within the atmospheric boundary layer. Most codes and standards recognize that wind tunnel testing can produce reliable information for designers, especially when their projects are in complex terrain or on exposed sites.

Retrieved from "https://engineering.fandom.com/wiki/Wind_tunnel?oldid=7976"
Community content is available under CC-BY-SA unless otherwise noted.